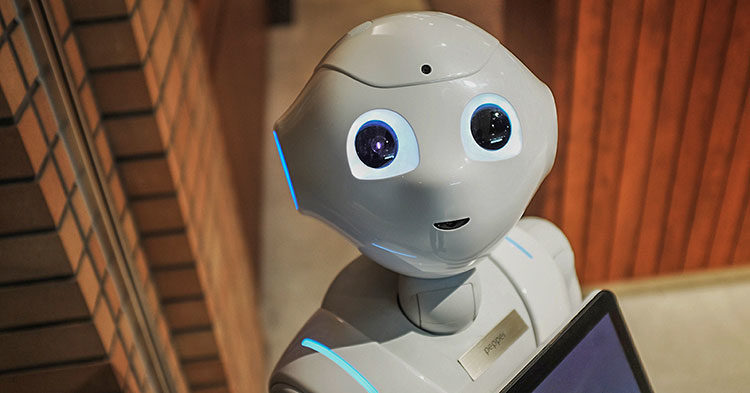 Hamid Anbari is born in 1367 and has studied mechanics; he is a painter too. His fellow in IdeKavan robotic company is Abolfazl Hassani

The third person of this engineering team is Mohsen BaniJamali. Here is the interview we had with these people. All of them belives that we are living in a new era: the era of robotic startups.

It is probable that other startups become interested in robotics and want to offer their services via robots.

In Iran, the idea of a startup is important. In other words startups follow their ideas and then try to find customers for their services.

This is wrong. First of all we should see people’s needs and problems. We want to do this in the field of robotics.

Robotic consists of three technologies: mechanic, electronic and software. We should work on all these aspects.

It is not important where we stand. If for example Germany is a leader in this field, it is because of its 50-year experience in metallurgy based on which it has developed robotic industry.

Look at India; it didn’t have anything to say 20 years ago in the field of IT. But now it has reached a significant position.  Thus success in this field is not related to your position. Your ideas and efforts are important.

We had offers from other countries. Even Europe Space Agency offered 200.000 dollars to acquire only 10 percent of our company.

They say we want to be your partner in gain and loss. This means venture investment which is not common in Iran.

Yes. Many big companies wanted to invest in our business.

We are considering them. But we want to think about them using a good model because we don’t want to leave Iran.

It has a significant effect on company management. Digikala could grow fast because foreign investors came and invest on it. Our new policy is toward development as well.

No, Arak office is merged in Pardis Park office and all the team members are here. We work on two fields: international and internal projects. One is named Ipack Robotic and the other is IdeKavan.

They considered us as an industrial robot maker before we provided our new products but things has changed now.

Private service companies in the field of industry offered us cooperation but it was to the extent of research and design.

I don’t know how much they know us. Two or three years ago we negotiated with DigiKala about offering service robots for their warehouses.

But they didn’t accept it. Robotic is a complex product and customers should have enough information about it so that they can trust us.

We want to overcome global market in the field of industrial robots and domestic service robot. We want our products to be used all over the world.

Also we want to meet robotic needs inside Iran. We produced a robot which costs one billion Tomans with only 60 million Tomans.

In the next five years, we want to work with Google and Microsoft to make a new robot named travel robots. We have many ideas!

We have produced a baggage which is the first smart baggage in the world. This baggage has two benefits: movement service and digital service.

It can follow its owner and can be used as a means of transportation as well. Segway technology is used in producing this baggage.

We developed an application that increases the security of its lock and it is possible to locate it via internet.

Many baggage manufactures and Segway companies have asked us to produce a large number of these baggages.

The first place in startup world

Startup world is a competition held with sponsorship of EU Space Agency and the robotic division of this union.

AZO, an international company, holds this event which is a subcategory of EU. Different robotic startups participate in this event and show their robots.

Even big and known companies attend it to introduce their startups. After examining different designs in terms of changes and effects, teams’ experience and robots’ use in daily lives, a referee committee consisting of 50 people choose the winners.

This committee consists of directors of space and robotic department of EU, directors of German universities and some directors from big and famous robotic companies.

At the first stage, smart baggage model was chosen and it became one of the top three models. Then it gained the first place in this competition in the field of service robots.

The only robot company of Iran is Ipack Robotic. There are about 5000 robotic startups around the world. This year, startup world has focused on service robots.