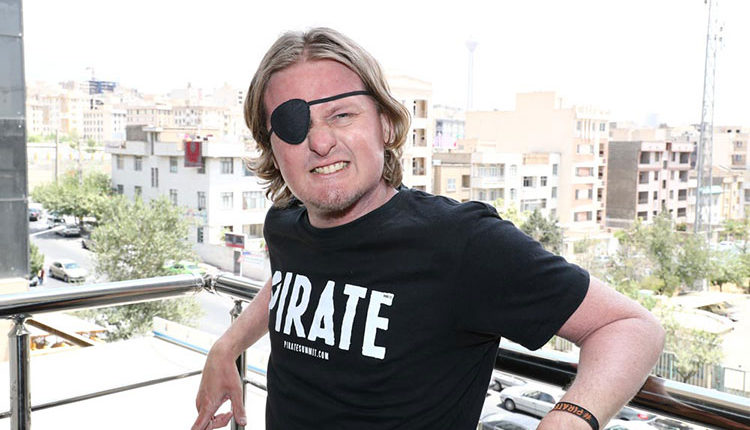 He had come to Iran to visit Iranian startups and select among them so that these startups participate in Pirate summit event which is held every year in Koln.

I’m a series entrepreneur and have had several startups. Right now I’m the global organizer of “Pirate summit” which is an international startup program. I’m the founder and CEO of “Fragment”. Before than I worked in a startup called “Infogram” which is for making and sharing infographic.

It is a conference about technology which is held every year in Koln. The goal is to gather together those who are active in different fields of entrepreneurship. This event is held in an unusual place.

It is held between two train lines in Koln. People come and see art works, artists and inventors. There are shows such as statues on fire or competition of robots. We invite innovative people and investors. The relations between those who participate are strong and stable.

We hold this event between two train lines which are working. Every 10 minutes a train passes and whistle and we whistle too.

People who participate in this event are valuable. This is a 3-day program which provides good and exciting experience. All those people are selected and no one attend there without invitation.

We invite people because we have limited space. Thus each year we try to improve the quality rather than the number of people invited.

One the ways to earn money is selling tickets. In last days before this event, the tickets are sold for 300 euros. But in fact we don’t get any profit from these tickets. We can not supply the costs only by selling ticket.

This is my second time in relation to Pirate summit. Last year this event was held in Avatech and now it is held in FinStars.

The number of startups in Iran which are knowledge-based is more than other parts of the world. But Iranian entrepreneurs don’t have global view and there are a few people who want to work internationally. There are many startups that do experimental works like Foodchi; these startups are likely to fail.

A part of it is normal for ecosystem. But I think Iranian entrepreneurs are so innovative that can make something brand new.

They are very smart in terms of technology. They are eager to get new information and use them. Those companies which are copies of foreign samples are not merely copies. In fact they have made those foreign ideas domestic.

Cafebazar. I think those startups in the field of app sharing can grow well. Startups like Snap and Tap30 and also Donit have bright future as well.

I love mountains. I always wanted to go to Damavand. I gathered people from technology related companies together to conquer Mount Damavand. We went to the altitude of 4100 meters but I failed to conquer it.

Here we talk to Uldis Leiterts who believes that young startups and those who had brilliant ideas can act as pirates and steal the market from big and famous companies. He had come to Iran to visit Iranian startups and select among them so that these startups participate in Pirate summit event which is held every year in Koln.

Pirate summit comes from the idea which is based on a proverb: “when you can be a pirate, why do you become a member of the navy?”

Entrepreneurs go to places where no one had been before. Pirates do the same thing.

I think this is one of the startups that can become the number one Iranian startup and it has a smart team. I think it can compete at international level and it is very useful for big companies which need these programs.

Yes, I went to Shiraz, Qom, Kashan, Yazd, and Abyaneh.

I’m vegetarian and I love all the veg foods.

Tehran. It is so alive and it is growing.

There is a successful monthly magazine in Baltic and a site called “Techrasa” in which the situation of entrepreneurs is written in the field of Baltic. But there are a few publications in the field of startup.

Yes. We have a weekly magazine and it is supposed to become a newspaper.I think government should teach the student to launch a business after graduation rather than being employed in a company. When you want to make a company, you should have big ideas and don’t be ashamed.

Startup is a financial method in general. These kinds of companies are knowledge-based and grow based on their knowledge. As long as you grow, it doesn’t matter what you’re offering.

It doesn’t matter. Market size is not an important thing on its own, but the company should have this vision that during 5 to 7 years, it can reach to 150 million dollar revenue in each year.

We call it an internet company. But I think quick and big growth is important for an entrepreneurship company. Startup is a company based on technology and it has a big potential to grow.

Most of the time, entrepreneurship companies have this international vision but they don’t work at international level. Because they need to employ large number of people.

Yes, we have an interview with four entrepreneurs every week and its translation is published on Shanbemag site. You can read your conversation in English as well.

A large number of Iranian companies focus only on Iran and they can’t work outside of Iran. Some people don’t want to work for foreign customers and some foreign companies think that Iranian ideas are the domesticated version of foreign startups.

Foreigners forecast that next generation of Iran startups would be better. The time that such a change needs depends on the culture of people and the country in relation to failure.

Many countries around the world have positive view towards failure because it is a part of improvement. For example in Finland, they have a national day for failure. Failure is essential for success.

After we accept that failure is an essential and it becomes a part of our culture, we should learn how to talk about our failure. Iran startup ecosystem should be encouraged to start again after failure.

If it doesn’t happen, startups won’t survive for sure. But it takes about ten years that the first generation of Iran startups becomes substituted by the second generation.

Hamfekr becomes a landlord in Mashhad