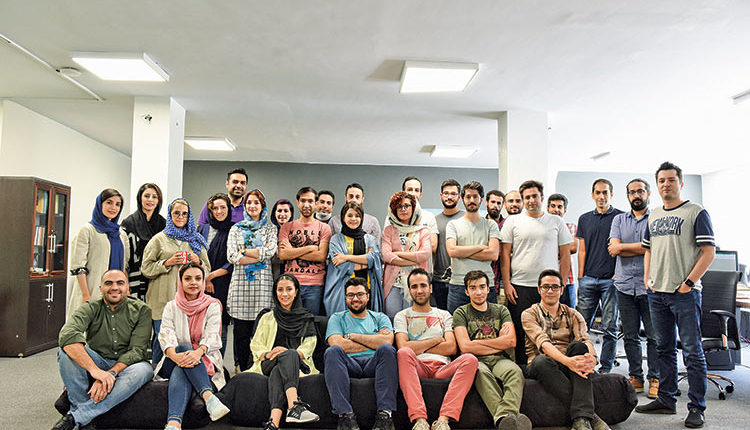 Hamid Rafieian , founder and CEO of Karafs tells of Iran’s $ 2 billion Mobile Health Market and their efforts for a 1% share of the market, and why he and his forces are good!

If Karafs is to become a big business, it will make investors look at health care capabilities. However, under the current circumstances, it has managed to attract about one and a half billion Tomans of capital by divesting 5% of its shares.

A business that with 100 million Tomans of personal capital and 60 million Tomans in seed stage managed to bring the team forward four years without having to spend the least on advertisement.

But now it has many plans to grow and wants to become a reference in the Iranian health sector.

He is now working on calorie counting, diet and exercise  plan. It has more than 2 million installations and 300,000 users have already purchased Karafs. Karafs’s monthly income is about  220 million Tomans and has a staff of 40.

Hamid Rafieian , the CEO and co-founder of Karafs, which started the business in 2014 with Hamid Malek and Kaveh Fazaeli, said in an interview with Shanbe Magazine about this startup.

Having studied aerospace and worked in petrochemical companies, he now hopes that with his startup success, Funds to be absorbed into the health sector.

Rafieian attributes Karafs’s success to the unified team thinking that is involved in all things corporate.

Transparency puts the team first, and the team members have said  no  to the huge salaries of other businesses because Karafs has a bright future ahead of them and of course stocks.

Young Karafs managers do not believe in the formal working space of their employees and have created new ways of doing business.

Rafiean has a particular belief in the enjoyment of staff in the workplace, and this is one of the reasons why Karafs has grown.

The CEO of Karafs also talks about the importance of teamwork and repeats the names of his colleagues over and over, saying that we are not person-centered and that values do not belong to one person.

The reasons for Karafs’s success, how to keep its employees, how to keep its users and customers, growing without advertising, the fears and worries of founders and so on are other things that he has talked about.

When we started, customer service was very important in a segment like calorie counting, because it was new and people were confused about how to work and how to guide customers.

It’s interesting to tell you that a week before the product launch, I and 2 other founders had a meeting about whether or not having the contact us section. Eventually we decided to have this section and include a phone number.

When we put the product in the cafe bazaar store, we had up to 40 phones a day from day 3, and we answered the phones ourselves. There was a lot of tiredness, but after a while we eagerly responded to emails and calls.

Then we came to the conclusion that one of our differences with the rest is that we are staying with customers and that is why they stay with us.

A month later Karafs’s Instagram page was launched. We also launched this page to reach out to customers and it became a product.  Now, my wife, Niusha Fakhar, is in charge of Karafs’s social networking division and has brought many users to Instagram through her professional work.

So I think what set us apart from other similar businesses in the beginning was focusing on serving customers and keeping track of their needs, and using the power of social networking and delivering quality content to users. These two cases became a launching pad for Karafs.

Our experience shows that even going from stage 3 persons to 6 has many challenges, such as controlling and communicating and managing the work.

Checking the amount of work we do and the output we receive are not easy at all, and these are no small challenges and take a long time to solve. So a lot of people at the start of the job, prevent them from concentrating.

You need to focus on the exact points and maneuver on the same points. You should always focus on launching an MVP with a team of 3 or 4 people and moving forward.

We have to let the users determine the next steps. Listen to their demands and make future product based on user needs.

But for example, 10 people have high expectations of themselves and want to launch a perfect product, which in most cases causes a lot of problems and these people decide instead of the user and usually do not get the good results.

Now we are over 40 and without this solution, we would not be able to run the business. First, there must be a small number of people in order to find the market with less risk and more concentration.

Karafs has already had about 2 million registered users. However, with the exception of the 4 or 5 million tomans spent on various tests in the last three to four months, we have not paid for any advertising.

Meaning we have all the 2 million active registered and installed users from organic channel. In fact, we have come up with zero budget marketing.

Did you manage celery with just the same $ 100 million in initial capital?

In addition to the initial 100 million Tomans, we also had a round in September 2017, which attracted 60 million Tomans from Smartup Venture Capital.

It is now earning, and although we have reached 40  team member since last year, Karafs is now profitable. The profitability of Karafs gives us the impression that such a market is big in Iran and wants a lot of demand.

So if you respond to people’s needs in a timely manner, business can be profitable, as this market has the necessary traction.

We operate in the mobile or mobile sector, and 50 million smartphones in Iran are a large number and the growth chart of users is also on the rise. Meanwhile, this market is not yet known and its details are unknown.

The global health market has also been the focus of attention in recent years and attention has been drawn to the capacity of this market and the size of the digital world has tripled in the past two years.

As a whole, Digital Worldwide is worth $ 80 billion in 2018, moving at a rate of 30 percent annually, and it is estimated that the market will reach over $ 300 billion by 2024. Much of this growth is related to the mobile health sector.

In Iran, we tried very hard to measure the market, but because we did not have reliable data, we estimate for the Iranian market compared to other countries such as Germany. In 2018, the market value of the German mobile health market was $ 40 billion.

We estimated the Iranian market based on population, internet penetration rate and etc. compared to Germany, and concluded that Iran’s mobile market value is currently around $ 2 billion and will be around $ 9.2 billion over the next five years. Of course, this is just an estimate, and it could be even higher

We’re planning on gaining 1 percent of the market in the next three years. Let me add that 65% of Iranians are overweight, according to the Ministry of Health.

Assuming Karafs only considers this population as its target community (because we have many users who are lean and want to become obese), about 55 million people are our target population. If each one of them costs 20,000 Tomans a month, there will be a huge market.

About 300,000 user have bought from us since the beginning.

In the cafe bazaar store, up to 25,000 people see Karafs daily and about 1,000 people install it daily. Of course, these statistics are only for the cafe bazaar. While Karafs is also on Sib app and Google Play, it also has installation from these two markets.

When we got 30,000 in a few days, we thought how easy it was and we were done, but when growth stopped and you no longer saw us, we knew we had to do something because we were sure there was a big market  And we also have interested users.

We had two very difficult periods; one was after the Karafs started. At this time we really didn’t know what to do to get the user and introduce the app.

Launching Instagram, being on the other page, communicating with customers, and being in the cafe bazaar were our solutions to attract users.We cared about every installations we were getting. And we didn’t have the money to do advertising.

In fact, it is very difficult to get rid of zero and get to where there are offers and the business wheel starts to spin. Sometimes we were helpless.

Of course, apps like Karafs have a good feature that people will soon be suggesting to each other, because if anyone uses it, people around will see it and ask for the address, and then the app will be introduced.

We also surveyed users and found that about 60% of our users were familiar with us through suggestions from their friends and acquaintances.

However, it is very difficult to reach the stage that users of your program recommend to others. I think a lot of people and companies are frustrated at this point, going through the first step and getting to the point of being seen.

Maybe luck was with us! Because of the many times we were giving up, good things were happening that kept us hopeful.

Before Nowruz,1395 was a very difficult period. The income was low and we had no experience of that falling and rising in April. Nowruz 95 was the first time that Karafs was seriously experienced this period.

Our initial capital had run out and our earnings had declined. We were disappointed. But after Nowruz and about April 15, our earnings multiplied. Maybe if we didn’t make it, we would give up.