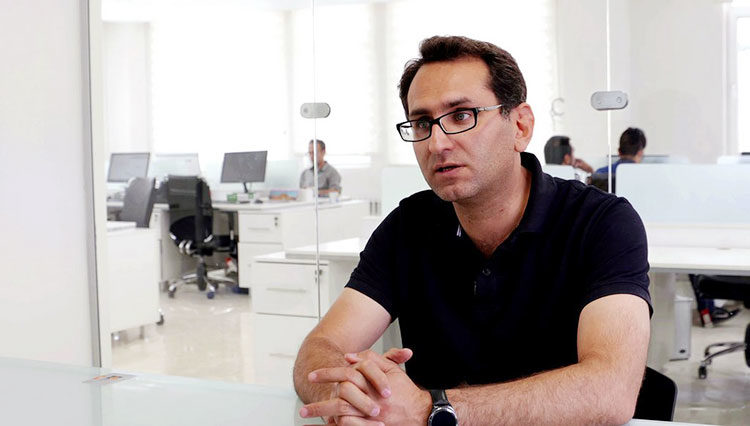 Reza Kalantarinejad, who launched Shezan startup in his 40s, has chosen to use the term “a place for creation” instead of company and believes that Shezan is for creating big events in the field of technology. Shezan is born in Bahman 1394 and around 40 people work on it.

Dr. Kalantarinejad picked one of previous issues of Shanbe and said: “this person has launched a real startup.” That was the photo of Tabasom Latifi, founder of “Mamanpaz” website.

Among Iranian startups, he believes that her idea is innovative and says: “one day this idea can be exported to the world.”

“In 1360s young people didn’t have the opportunity to go to university. Some of them went abroad and some other went to war. What happened in Holy War was very similar to entrepreneurial climate.

People innovate and create new things to overcome impossibility. If Holy War soldiers haven’t been heard and if we don’t pay attention to their experience, it would be supposed that entrepreneurship has come from the west.

But that’s not true and we had successful samples of new and innovative businesses in the past.”

He mentioned to difficulties and said: “young people work hard to develop knowledge-based technology businesses in order to add to the value of this country and our people.

We have a treasure of experience and people who have made all difficult and impossible things, possible. We should learn love, faith, responsibility and innovation from these soldiers. In this school, more powerful ones are more successful.”

“Successful brands like Golrang that are formed before startup space are examples of entrepreneurship and innovation. Maybe eight years of sacred defense had slowed down the development of new businesses but that era was a sample of love, innovation, sacrifice and creation.

So I believe that attention to Iranian entrepreneurs’ experience is essential for improvement of entrepreneurship ecosystem in Iran.”

Secrets to travel in Aysak