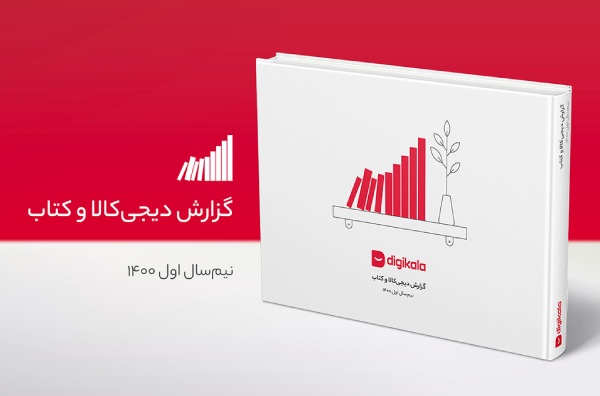 The first specialized report on online book sales in Digikala, which examines the position of books among the audience, the status of online book sales and the behavior and reading habits of the audience with the data-driven and statistical approaches, has been officially published.
The report “Digikala and Books, the first half-year 1400” with an important concentration on statistics and data of the book market on the basis of Digikala has tried to provide a comprehensive and conspicuous illustration of the Digikala status in the Iranian book market as well as the influence of its marketplace on this sophisticated area of the business.

This report, which is compiled in six chapters, evaluates the online sales of books in Digikala from the beginning of 1399 and the first six months of 1400. It also deals more precisely with the book market of Iran and the world, the path and history of Digikala in the book market, the social and cultural responsibility of Digikala in the field of books and the behavior and habits of users in buying books.

The Digikala and Book Report aims to answer the following questions:

1.What is the role of Digikala in providing books for the Iranian people?

2. What has Digikala done in the field of book sales?

3.What are the characteristics and habits of Iranians who have already experienced purchasing books from Digikala?

This report, like other reports of Digikala Group, has been prepared in the direction of storytelling with data. An excerpt from the online book sales statistics on the Digikala platform is given in this report:

●Record the most comments for George Orwell’s 1984 book

Digikala Book Report can be a fruitful and useful guide for other market players, book activists, social analysts, cultural policymakers and other actors in the field of e-commerce in Iran.
It is hoped that this report will be a significant step towards appreciating book activists and an incentive to empower the situation of books and reading in the country.

How the Juggernaut of an industry becomes bankrupt

An invitation to understanding!