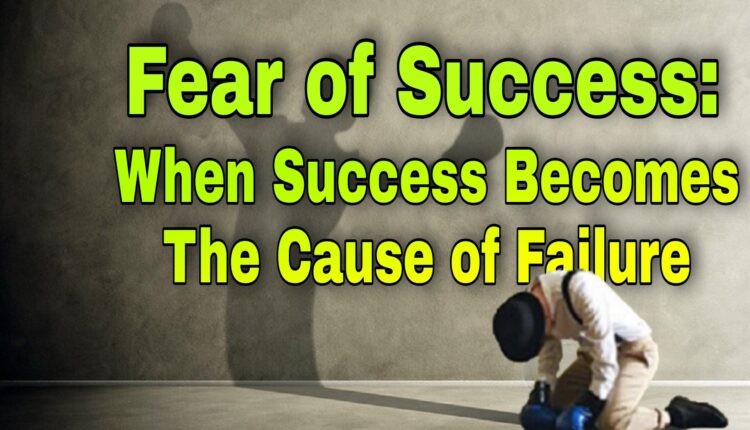 When Success Becomes The Cause Of Failure

In the eyes of many people, success seems to be a delightful feeling, however, to some people it is a real barrier to achievement. There are indefinite amounts of ways people can describe success to their liking and for each and every individual it is different.

Though surprisingly those who are afraid of success don’t consider the accolades or fame and wealth as the main factors of their fear. Instead, the fear is mostly regarding the consequences and after-math of the success. We have gathered some reasons as to why people fear success.

Many fear that if they were to acquire fame and wealth then it will most likely inflate their egos and turn them into people they don’t want to be. They fear that success will change how they act and they will treat others in a bad manner, but the truth of the matter is that no matter how successful one becomes, they are the ones in control of their actions.

Sometimes people have the mindset that if they were to be successful then it might have repercussions for their social communities and relationships. Studies show that this phenomenon is called “Backlash avoidance”. Therefore, people tend to avoid confronting these expected norms because they fear social or economic backlash.

Many people who are in the position to experience success are afraid that they will never be as good as their colleagues or people who work in their field in general. They may fear that they won’t be able to live up to the expectations and they’ll ultimately let down the ones who have faith in their success. This experience is called the imposter syndrome. Imposter syndrome involves feelings of self-doubt that persist despite their experience, education and accomplishments. They write off their success as good timing or good luck and nothing more.

Many have an intolerable fear of rejection if they go out of their way to strive for a matter that’s important to them. Unfortunately, this fear holds many back from achieving greatness and can lead to denying critical opportunities that might end in happiness.

People who are shy or socially awkward may be afraid of success because they don’t want to be in the spotlight. This form of anxiety has been even more noticeable with the creation of different social media platforms. According to studies almost 1,500 teens and young adults have this problem. While different apps allow self-expression, it also associates with high levels of anxiety, depression, bullying and FOMO, or the “fear of missing out”. Yet, while not everyone is made for the spotlight, it does not mean that anyone should hold themselves back or be afraid to thrive.

One of the most common reasons which holds people back from greatness is an overwhelming fear of change. As humans, we thrive on routine and we tend to be concerned about anything that can disrupt that change. The problem with it is that we will forever be stuck in one place. Most people believe if they try to change and fail, they will go back to the old routines; however, if they succeed then they will suddenly be in uncharted territory.

When we succeed, we grow and enter a new chapter of our lives which means moving on. The result might be outgrowing certain friendships, which is not always a bad thing. If what we have isn’t truly a friendship then it is better to lose the unhealthy environment, once we let go of meaningless connections, we will be able to focus on what matters.

If people had the major successful business that they had always dreamed of then, undoubtedly they would have to work twice as hard as they would before, however, no one works non-stop. That’s why people should set healthy boundaries for their works.

Another reason many people are afraid of success is that it creates new standards and expectations, and people get stressed about how to manage them in the best way possible. When someone is successful, others around them unconsciously raise the bar higher. Others begin to expect more and more from them and hold them accountable for any simple or tragic mistake. This fear of success is about fearing pressure and refusing accountability.

Excitement and nervousness share many similar traits. SO, it is easy to misinterpret excitement as anxiety. This can cause people to avoid situations that trigger such emotions. According to Dr. Susanne Babbel, Ph.D. the author of “heal the body, heal the mind”, when we suffer a traumatic experience, our body associates the fear we experience with the same feeling for when we get excited. And this leads to the victims of this matter avoiding excitement, which leads them to avoid success.

Fear of success is a very real struggle for many. But it’s not insurmountable. The key is to understand its origins and work through the emotions. That way, it won’t hold people back from getting what they really want.