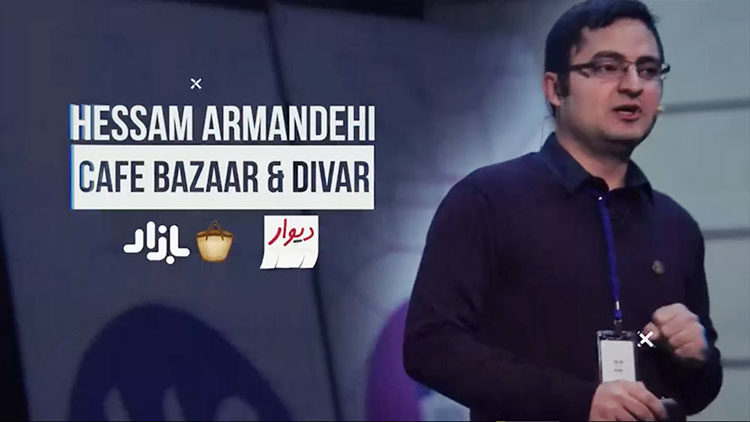 A boy with sneakers

But today they can meet a person who has built an Iranian Silicon Valley here in Tehran: Hessam Armandehi, founder of cafebazaar

Until yesterday young people had the dream of Silicon Valley. A Valley in farthest part of the world, in which most powerful companies like Apple, Asus, EB, Google, Yahoo, Microsoft and etc. are located.

They dreamed about people like Steve Jobs, Bill Gates, Zuckerberg, Jeff Bezos, Matt Mullenweg and others and wanted to work with those people.

But today they can meet a person who has built an Iranian Silicon Valley here in Tehran: Hessam Armandehi who is a man with sneakers.

A young person who has left Chalmers University in Sweden and come back to Iran in 1388.

He was to see his family and then go back to Europe but something had changed his life and he became number one man of Iran application market.

He was 24 years old who was interested in chess and reading Paul Graham’s websites and read TechCrunch and Harvard Business Review magazines.

He loves his mother’s foods and prefers eating at home rather than going to restaurants and eating fast foods. He works 8 hours a day.

He always checks his email and reads his favorite magazines before going to bed. He doesn’t have luxury cars or clothes. He always wears jeans and T-shirt.

His first partner was Reza Mohammadi with whom he started a site named “Tooti”. It was designed to get orders from customers and print patterns on T-shirts. But it didn’t continue because all the partners went abroad for education.

When he was back to Iran in 1388, he found that his friends including Reza Mohammadi were working on a project named “Farsi Tel”.

He became interested in it and decided to stay in Iran for longer so that he can negotiate with Irancel and Sony corporations about distributing this product. But at the end this project failed.

After that Hessam and his friends focused on turbulent market which was affected by sanctions to dominate intact Iran market.

All started with a simple application named “Bazaar”. It was a copy of getfirefox.com and later it changed to “Kafe Bazaar” and then “CafeBazaar”.

This app was introduced in media with a post from Mohsen Sahafi in Farnet weblog and after a while became famous. Within three months, it attracted 100,000 users. Until now, it has 300% growth each year.

The workforce became more than 100 persons and the office changed from a small one in the center of Tehran to a penthouse in Negar Tower.

Now 10.000 developers are working for this company. At the end of 1393, about 4.000 persons were working actively in cafebazaar whose share in this business was 12 billion Tomans.

This young person who is now 30 years old has 2 to 5 percent of all internet transactions of the country and about 10 percent of Iran internet traffic.

They were successful in attracting audience. By 1393 around 22 percent of the population has used many of their softwares and first page of cafebazaar has more than 20 million visits per day.

Now everyone talks about cafebazaar without knowing that who is behind this big business: a young person who didn’t think about being employed or traveling to other countries for leisure.

He is also known as a bad tempered person. People say that it’s hard to communicate with him. He believes that one should focus in order to succeed. Thus, he prefers to be alone with himself and his work.

History doesn’t look at one’s temper for judging. It is action and creation which is important in history.

Now that sanctions are being lifted, everyone is looking at this business because this is the product of sanctions era. At the moment it should compete with powerful companies like Apple and Google.