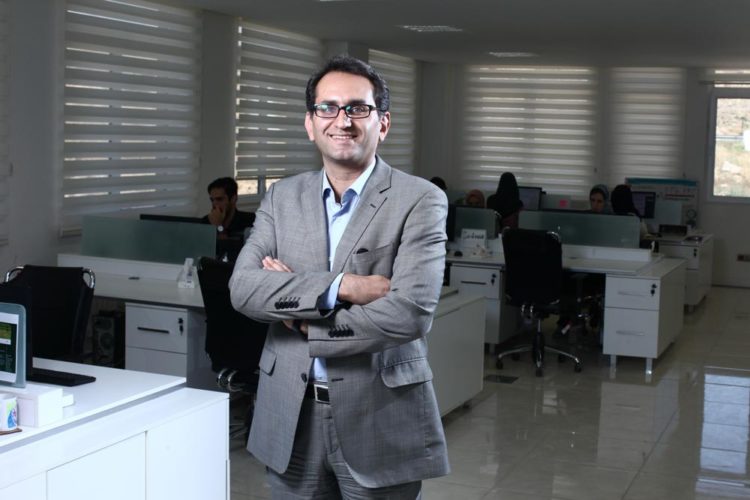 With the help of investors, founders of Shezan created a center of innovation and acceleration based on convergent technologies and Shezan was officially born in 12 Bahman 1394

We had heard that one of the biggest venture investors in Iran invested on “Shezan” startup and this startup had signed a cooperation agreement with a Belarusian company. In this regard, we met Dr. Reza Kalantari Nejad, founder of Shezan, talked about his business.

Shezan is a symbol of participation and influence in a big social change which is based on convergent technologies.

In 1382, I was engineering director of a private entity in the field of automotive industry. My title and income was good but I wanted to create and innovate.

Thus I left that entity and continue my studies in mechanical engineering. After a while I found that this major was not what I was looking for.

In previous years, I had met Dr. Bahrami and in this way I get familiar with innovative technologies. This field was interesting for me; therefore I decided to work of Nano technology as my thesis. During this time, I met Dr. Hashem Rafee Tabar.

On the other hand, investors became interested in it. With the help of investors, founders of Shezan created a center of innovation and acceleration based on convergent technologies and Shezan was officially born in 12 Bahman 1394.

There is a need in the market, it requires basic knowledge and Shezan helps these two to become connected.

Now the question is that how these four areas can be combined with each other? All of them have on structure and are governed by basic physical rules. Thus maybe it is possible to create a technology which has the features of all of them and beyond.

Automotive manufactures like Mercedes Benz believe that by 2050 automobiles wouldn’t be produced in one production line.

In fact they are going to be born from an incubator and customers would nourish them. In this way, automobiles would be individually customized.

For example, development of tools which are the connector between human and machines, a technology which is the combination of IT and cognitive science and tell us how to command a computer to type only by thinking.

Another example is the development of sensors that can identify pathogens in human body only with a drop of blood; or materials which can heal and repair themselves.

Currently Shezan is in final negotiations with an international pharmaceutical entity to investigate and develop a smart drug which enables controlled release of the drug to the required organs.

When the patient uses this drug, all the cells of the body will not get involved. It only sticks to specific cells and deliver the drug.

All the above examples are the topic of innovative teams of Shezan. We help young people in Iran who are interested in this area of technology to nourish their ideas and launch a business in the market.

We try to combine Nano technology and Biotech with each other and also IT with cognitive science in the short term to connect convergent technologies to Medicine. We are focusing on this area right now.

But in the long term, Shezan wants to bring academic technologies in the market and retailers. Our focus is on public customers and we don’t want to have customers which are industrial or state businesses.

We had heard that one of the biggest venture investors in Iran invested on “Shezan” startup and this startup had signed a cooperation agreement with a Belarusian company. In this regard, we met Dr. Reza Kalantari Nejad, founder of Shezan, talked about his business.

This is true because we pay more attention to creating technology than production. We cooperate with production companies like medicine so that we provide tangible products with their help. This isn’t a good situation.

One of the reasons is that it takes a long time for a technology to be provided to the market. Therefore, investors don’t want to invest on such technologies.

On the other hand, people expect others to come and produce what they have invented. They don’t pay attention to the market and just focus on their invention.

We have mediators who listen to both sides: those who invent and those who care about money. Shezan help the ones who don’t know the limitations of time and money discuss with those who want to invest on technologies and they develop a technological product.

This shows their foresight. Convergent technology is the start of a revolution. They see something in Shezan which is abundant in the west. In fact investors look at the future of our business which will be success. They are considering a long term period.

It differs from other service startups. Shezan provides a technology which several companies can benefit from and each one can import a new product.

That is many technological ideas come from a single team and each idea reaches many businesses. This growth is more than the growth of service startups. Shezan is known from the number of its ideas and technologies.

No, I don’t think so. Look at Alphbet co. and projects of Google X. Today, startups are working in the field of service but is Google known because of its service?

Startups are new in Iran and thus their main focus is on service. I think it is a big achievement that Sarava has invested on Shezan whose focus is on convergent technologies.

When someone is working on hardware technology, he/she can’t progress as quickly as someone whose focus is on IT. I think startup should have large capital return and be destructive for other ideas in the market.

Each startup should remove their previous startups in the market. Now, convergent technologies are destructing IT technology.

For example, PCs, smartphones and applications are trivial these days. Today, we talk about wearable technologies.

Sarava should answer this question but I think both of us are looking at the future. This is the start and fortunately government and investors are aware of the importance of this technology.

Yes. If governmental rules don’t exist, all the startups would face crisis. Deputy of Science and Technology and Pardis Technology Park are committed to support acceleration centers.

One of the common needs of teams which are working with Shezan is the access to equipped laboratories in four fields of convergent technologies. There is a large volume of equipment in Iran but they are not available.

One of these needed laboratories is related to electro-mechanic Nano/Micro sites. Thus we negotiated with Planar Co. and made a contract with this Belarusian company in INOTEX.

My dream about Shezan

More than 14 hours a day. If you consider work and life as an integrated entity, then the time you spend on working wouldn’t be important.

Yes, my wife works with me. I have my entertainment. I go to theater. I travel during weekends. I enjoy both my work and life.

I had decided to go to Trinity College in Dublin for a short period but I hadn’t.

No. I had the chance to experience unique thing in my country. If there wouldn’t be a challenge in my life, I would make one.

I dream of a day when many people can have the opportunity to create something in Shezan. I want others to feel that they can touch their dreams in Shezan.

There are many channels from information database to contact with company. Our center of creation has two gates.

The first is decuple events in which we invite those interested in commercialization of their achievements to come and choose the most innovative team and invest on them.

The second is that there are always a few vacant places for the teams we encounter with accidentally.

Startup in a village

Despite of fear, Attack