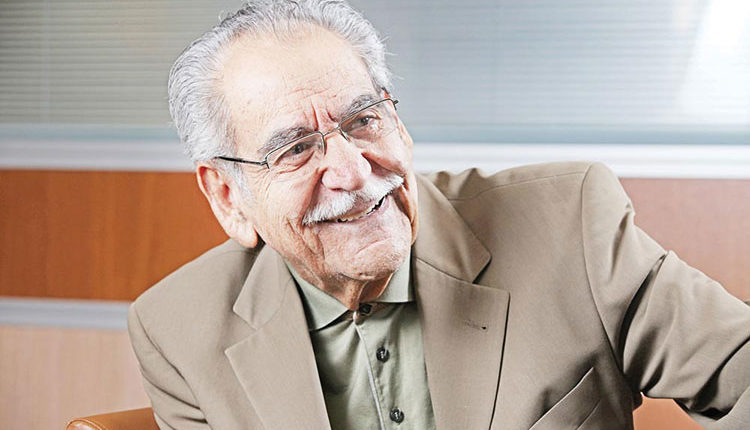 A teacher who became the king of sauce

Interview with Shahrokh Zahiri the founder of Mahram

Interview with Shahrokh Zahiri the founder of Mahram.

I’m 86 years old. I’m from Malayer and when I was two, my father moved to Tehran. I was the older child. When I was 8, my father became head of department of finance in Qom and we moved to Qom. I went to primary and high school in this city. When I was at the fifth grade in high school, my father died and I became family sponsor. Because of that I was exempted from military service. At that time, I was employed as a teacher in department of culture in Qom.

Because I had other goals, I decided to continue my study. In fact, my goal was continuing my studies. At that time, I wanted to go to Hozeh Elmieh. I did so and studied there for two years. In 1329, I was accepted in law major at Tehran University. I lived in Karaj for two years and then I went to Tehran. When I moved to Tehran, I started teaching in Jannat high school.

The salary I earned was not enough, so I decided to enter the market. At that time one of the famous factories was Derakhshan Yazd which made clothes for military organs. One the branches of this factory was in Tehran and I was employed there as a collector.

Never; I went to the store early in the morning and cleaned every shelves and even the sidewalk in front of the store.

When I went to the store, I didn’t have much work to do. I just sat on a chair. There were a number of sellers, one accountant and a cashier. Every night, these persons had disputes about accounting and accused each other. I wanted to find the problem and solve it. After a while, I found that the main problem is related to invoice. I could solve the problem and told it to CEO of the factory. This was the milestone of my entrepreneurship.

One day they received a letter from police department. This department had stated that they were not going to buy clothes from this factory anymore. It was very dramatic.

I went to police department and begged to talk to the head of procurement office. When I met him, I said that I was student and support the family. I said if they didn’t buy clothes from Derakhshan Yazd, I couldn’t study and earn money for my family. The head of department said they would give a letter and continue buying from our factory.

Mr. Harati ordered to reward me 500 Tomans. I didn’t even know how to spend such a big money! Since then, he wanted me to do his personal works. When he founded another company in the field of importing automobiles, I became responsible for opening letters of credit and customs clearance of vehicles from the port of Khorramshahr.

Righteousness, commitment and integrity in my work.

I didn’t have any experience in the field and I had to choose a name. I chose Mahram because it’s easy to pronounce it.

I didn’t have much money for launching a factory but I knew a person in Yazd who was very rich and I had talked about launching a business with his capital and my management with him. I called him and talked about opening Mahram factory. He accepted. Thus I opened Mahram in 1349.

Besides me and the investor, 13 persons were employed.

Alborz industrial complex in Qazvin and in an area of 11.000 square meters.

We produced Mahram sauce based on the model of Kraft Food company in the US. We even used official system and sterilizing methods. At that time, I myself didn’t know what sauce is.

We had but Iran food industry was among the bad industries. Yeko Yek and Chin Chin were active in the field. But food industry didn’t have standards, organization and schedule. The quality of products was very low. On the other hand, women were housewives and didn’t use ready foods.

I had told to 20 to 30 friends and relatives of mine to go to different stores and asked them for sauce. I paid the money for buying these sauces. This strategy worked. In this way, the seller would think that this product have many fans and order it.

I think having a goal was the first factor of my success. Honesty, resistance and hope are other factors.

Mahram had seven factories during growth stages; in general, 400 to 500 persons were employed in these factories.

We entered exchange and they took the factory from us.

We had to do so; after the war because of economic problems, central bank reduced private companies’ credits by 50 percent. Thus we faced problems in buying ingredients. They suggested that we made Mahram a public company so that money would be injected to the company.

We kept 55 percent of the share for ourselves and gave 45 percent to the exchange.

Unfortunately a group came and bought the shares and entered board of directors. They provided programs which were not effective. At last, they suggested us to sell our shares!

They wanted to take the factory from us.

Yes, they paid an amount of money in cash and gave a 3-month check as well.

Mahram had 60 to 70-billion-Toman income per year. But they gave us 3 billion Tomans and a check for the rest of it. But we had to give it back to them.

It was hard for us and we had to leave everything. After I left Mahram, some of the personnel asked them to name one of the halls of the factory after Shahrokh Zahiri but they fired those ones who had recommended this.

Mahram is not well these days. Mahram could become a big brand in the world but it is an ordinary factory across Iran.

When we launched concentrate factory in jiroft, there was a factory in the field of mineral water which we wanted to add to Mahram. But it didn’t have profit thus we assigned its CEO to others. I worked in some other factories as an advisor like SunStar. Now I’m a consultant at the Chamber of Commerce.

We exported sauce to America when there were sanctions about importing to Iran. Because my brother lived in the US, when I went there, I visited shopping centers and assess the quality of their products. Also I visited Germany and found out that they used garlic. I bought one and brought it to Iran. We made pickled garlic and exported it to Germany.

Export to the US was somehow political; U.S.A had put some sanctions on us in the field of food, carpet and etc. I knew a person who was the owner of IranGolab and I had seen his products in the US. I asked him about the way he export his products and he said trough Dubai and in the name of a Pakistani brand. We did so and export Mahram products like pickles in boxes with Pakistani name and Mahram brand on the bottles.

Modiseh in a glance